It is not certain how the daffodil became the national flower of Wales but Welsh people often wear a daffodil in their buttonhole on March 1st for St. David’s day.

#Sunday Stills is a weekly photo challenge run by Terri Webster Shrandt. For the second Sunday in March, the challenge is your national or state flower.

I am English and our national flower is the rose. I love roses  but they  flower in the summer here.  So I cheated and took a trip across the Severn Bridge to Wales and chose the daffodil. St. David is the  patron saint of Wales and the Welsh traditionally wear a leek or daffodil in their buttonhole on March 1st which is St. David’s day.  St David was a 6th century Christian missionary from Pembrokeshire in Wales. He travelled widely including making a pilgrimage to Jerusalem where he was made an archbishop. When he returned to Wales he founded a dozen very austere monasteries. He is supposed to have died on March 1st 589 and is buried in St. David’s cathedral in Pembrokeshire.

It is uncertain how the daffodil became the national flower of Wales. It is thought that Welsh soldiers would wear a leek in their cap so they could be distinguished from the English. The Welsh words for leek and daffodil are the same so the two may have got confused. There is also a story that Lloyd George our only Welsh prime minister   wore a daffodil at the investiture of the Prince of Wales though this is not confirmed by photos.

If any of my readers are Welsh: “Dydd Gŵyl Dewi Hapus!” (Happy St David’s day).

What ever the reason I love daffodils. The ones at the top are from my garden. The ones below from the local park. When I see them in flower I know that Spring is well on the way.

I wander’d lonely as a cloud
That floats on high o’er vales and hills,
When all at once I saw a crowd,
A host of golden daffodils,
Beside the lake, beneath the trees
Fluttering and dancing in the breeze.
Continuous as the stars that shine
And twinkle on the milky way,
They stretch’d in never-ending line
Along the margin of a bay:
Ten thousand saw I at a glance
Tossing their heads in sprightly dance.
The waves beside them danced, but they
Out-did the sparkling waves in glee: –
A poet could not but be gay
In such a jocund company!
I gazed – and gazed – but little thought
What wealth the show to me had brought.
For oft, when on my couch I lie
In vacant or in pensive mood,
They flash upon that inward eye
Which is the bliss of solitude;
And then my heart with pleasure fills
And dances with the daffodils.

A few years ago daffodils which William Wordsworth wrote in about 1806 was chosen as the nation’s favourite poem in a BBC poll. Now I travel less I can appreciate much more the inward eye. I am also glad that unlike Wordsworth I have my photos to look through. If you enjoyed this post please leave a comment and follow me on Instagram to see more of my photos. 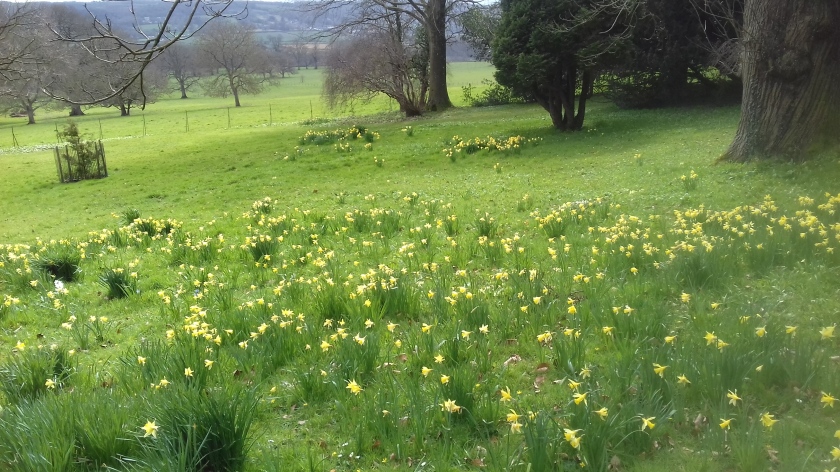 How to decorate a Christmas tree.
Greenwich where time begins. The prime meridian where the eastern hemisphere meets the western hemisphere.
Lovely meal in London with Richard
Saturday morning television
Loading Comments...
%d bloggers like this: