Season one of Bridgerton is an eight episode series which premiered on Netflix on Christmas day 2020. Although it has been described as historical fantasy not fact it is great fun. Producer Shonda Rhimes  imagined an alternative regency period where Queen Charlotte, the wife of George III was of mixed race rather than of German descent and much of the aristocracy was also biracial.

The series is based on the regency novels of the best selling American author, Julia Quinn. The books follow the attempts made by Violet, the Dowager Viscountess  Bridgerton to marry off her eight children. The children helpfully have names in alphabetical order A-H. Series 1 focuses on the eldest daughter Daphne and her relationship with Simon, the newly created Duke of Hastings.

The first series is set in 1813 in London but much of it was filmed in other cities including Bath.  It has been described as a cross between Pride and Prejudice and Gossip Girl. Julie Andrews acts as narrator reading extracts from the anonymous Whistle Down Newsletter.

What is the difference between Georgian and Regency England?

The Georgian period covers the reign of all four King Georges from 1714 to 1830. Regency just covers the period from 1811 to 1820 when George IV acted as regent for his father George III who went mad.

I belong to a walk in the past historical walking group and on Sunday we were asked to meet at the Holburne museum for what our leader billed as a Bridgerton walk. I also took the opportunity to photograph a couple of doors for #Thursday doors, a weekly feature that lets door lovers from around the world come together to share photographs of doors and the stories behind them.

Although Bridgerton is set in London the film crew used locations around the country for many of the scenes. I enjoyed spotting many of my favourite Bath buildings. The Holburne museum  was used as Lady Danbury’s grand mansion and the scene of the ball in episode one where Simon and Daphne meet.

In real life it is a very good art gallery with a lovely coffee shop to the rear. At present it has a special exhibition of Venetian Canaletto paintings which I am looking forward to viewing.  It overlooks Sydney Gardens which is the last remaining Vauxhall pleasure garden.  Jane Austen and her friends would enjoy promenades and public breakfasts as well as balls and other entertainment in the gardens and it is still a lovely park to stroll in and get away from the hustle and bustle of central Bath.

Here are some more locations from Bath and a couple of extra doors for Thursday doors.

The Modiste shop run by Madame Delocourt. It is a shame about the green rubbish bags. 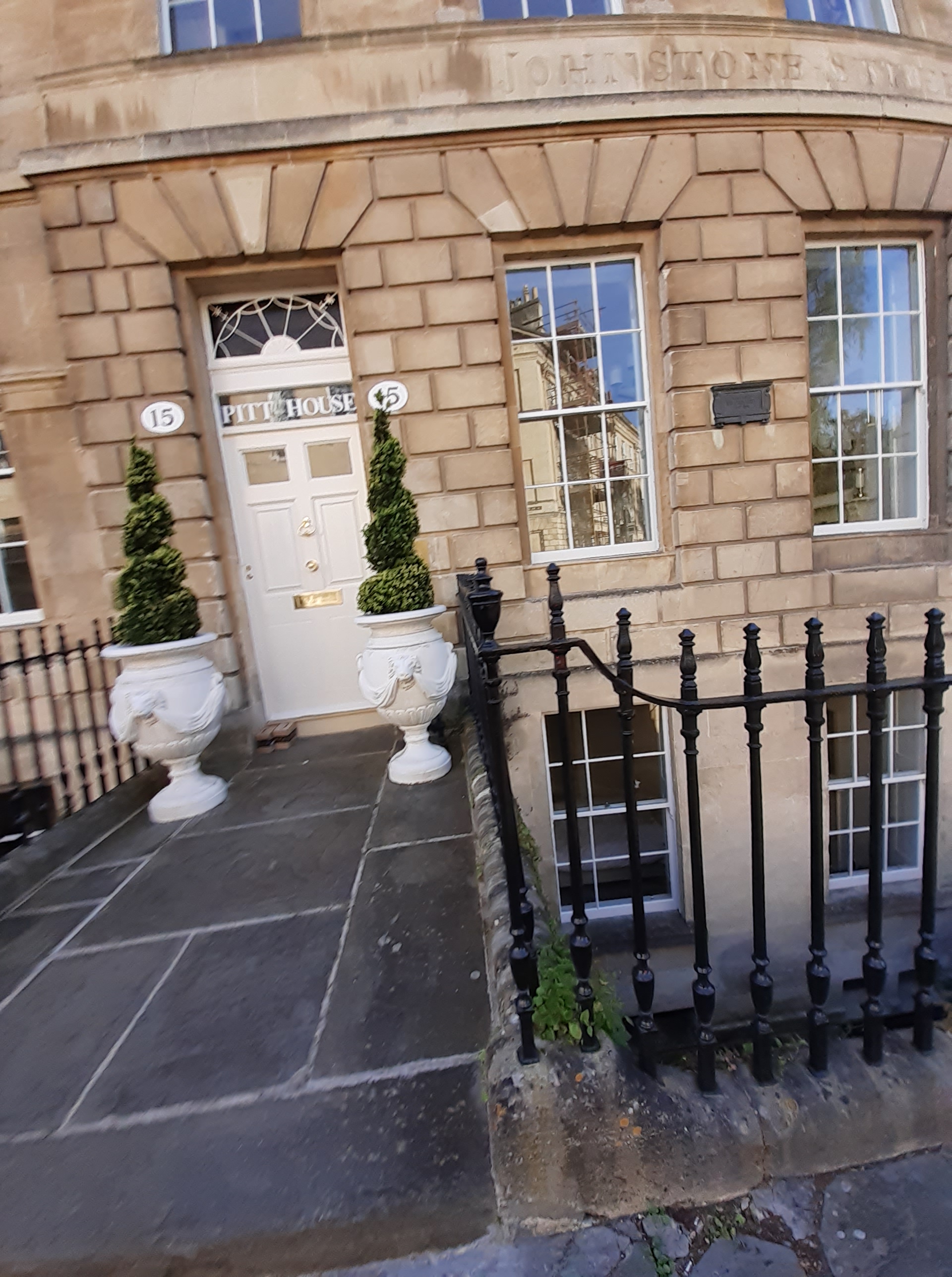 This front door once belonged to William Pitt, the younger, Britain’s youngest ever Prime Minister who took office for the first time at the age of 24. He later became chancellor of the exchequer and was responsible for introducing income tax. It is on sale and can be yours for £3.5 million (4.5 million dollars). The house was designed by Thomas Baldwin as part of the Pulteney estate and built in 1792.

I think this is one of my favourite doorways in Bath. I particularly like the candle snuffers each side and the winch on the left to take goods including coal down to the basement. It was once owned by Catherine Macauley, one of the first female British historians. I think she must have been quite a character. She was described by a friend as “a very sensible and agreeable woman and much more deeply learned than beseems such a fine lady”. She wrote an eight volume history of England and travelled widely. Catherine even stayed with George Washington and his family at Mount Vernon. At the age of 47 she caused a scandal by marrying 21 year old William Graham. She greatly admired the Anglo saxons and the bust above the door is of Alfred the Great.

I could spot many Bath streets in Bridgerton as people went for carriage rides or promenades. When they were filming they covered the modern road surfaces with mud but in regency times the posh part of Bath would have had stone setts or cobbles. The paperboy walks along the Royal Crescent pavement to deliver the Whistle down news and if you fancy visiting the Feathringtons, number 1 Royal Crescent is now a museum. On Sunday hot air balloons were drifting over the green in front of the Crescent adding to the regency vibe.

#sundaystills monthly colour photo challenge shades of pink
Worms head Gower peninsula. You can walk over the causeway at low tide but we were too late.
Trip to Rhosilli,one of the top beaches in the U.K. and we had good weather
Scenes from Brigerton the dressmakers shop. Shame about the rubbish bags.
Scenes from Bridgerton tea shop in Bath #awalkinthepast
Loading Comments...
Comment
×
%d bloggers like this: